Email: sales@ctoolmake.com
Chat with us on WhatsApp

What is Tungsten Carbide?

1. What is Tungsten Carbide?

Tungsten carbide, often called simply “carbide,” is a familiar material around the shop. This compound of tungsten and carbon has revolutionized the metal-cutting world over the decades, enabling increased speeds and feeds and providing longer tool life. Tungsten carbide was fi rst investigated as a cutting tool material in 1925, by Dr. Samuel Hoyt, a scientist at General Electric’s Lamp Department. Later GE opened the Carboloy division to produce tungsten carbide cutting tools. In the late 1930s, Philip M. McKenna, founder of Kennametal, discovered that adding a titanium compound to the mix made the tools work better at higher speeds. This began the march toward today’s lightning-fast cutting speeds.

“Cemented tungsten carbide,” the material that makes up the tools and inserts, is actually grains of tungsten carbide, along with particles of other materials, cemented together using the metal cobalt as a binder.

There are several tungsten ores that can be mined and refined into tungsten or made into tungsten carbide. Wolframite is the best known. The ore is crushed, heated and treated with chemicals. The result: tungsten oxide.

2. The Manufacturing Process of Carbide Tools; 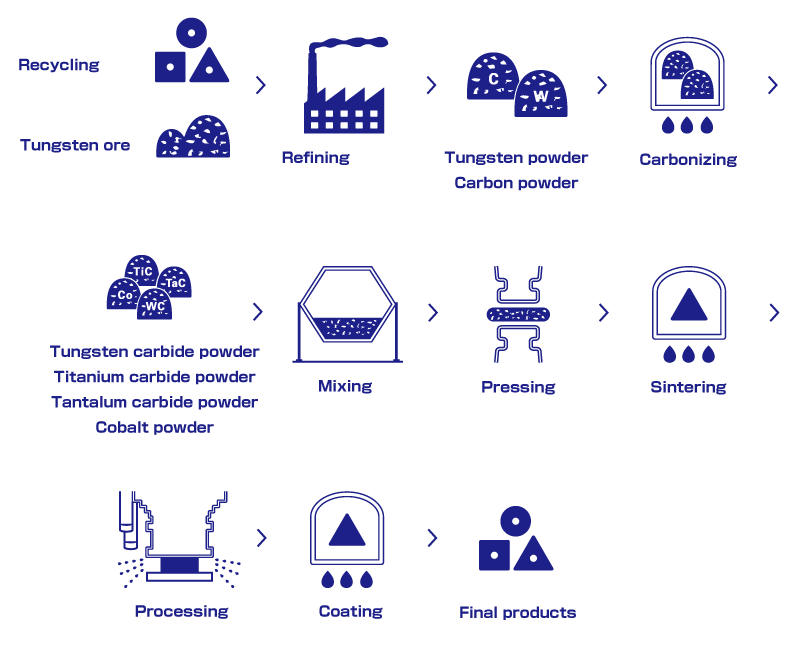 The figure on the right shows the condition of a cutting edge during machining. The cutting edge cuts the workpiece and chips are produced. The temperature at the top of the cutting edge becomes as high as 800°C because of impact and friction.

Cemented carbide grades that can withstand these high temperatures are the most successful.

Carbide formed into different configurations are the most popular, and they are called indexable inserts. Indexable inserts are used for various shapes of holders and selected according to shape of the workpiece and cutting mode.

If you want to know some information about Diamond Grinding Wheels, Send Us the Email.